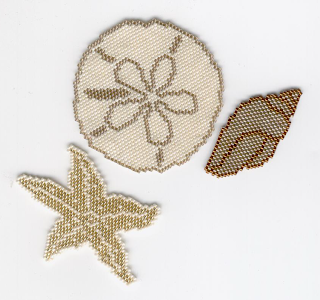 At the beginning of summer I completed this trio of shells using Toho seed beads and peyote stitch. First I sketched the shape of the shells, then I transferred them to graph paper and filled em' out from there. It took a couple of tries, but I finally ended up with these three that I liked.

These shells sort of celebrated my move to Jacksonville this past spring. It was a long awaited move, we have jumped around this country following jobs and we finally ended up in the same city as my folks. Finally having family in the same town is very reassuring, especially after having traveled around for so long and moving every couple of years since graduation.

Actually, since graduating high school I have not lived in the same town or state as my parents until now. I am an Air Force brat and while in high school we were stationed at RAF Alconbury in the United Kingdom. So, once I graduated high school, I left the country and returned to the US to start college at Michigan State University. At the university, I was lucky enough to have my older sister attending school as well, so I wasn't entirely alone. So, now in Jacksonville, I am giving my children (an 8 yr. old and 6 yr. old) the security of extended family and the opportunity to get to know their grandparents (something I never had).

Anyway, excuse the tangent I went off on. I will hopefully be posting my patterns online at www.bead-pattern.com to be purchased and downloaded. So, once I sign the paperwork and get accepted into their program, I will post the news here.
- August 22, 2007 No comments: Links to this post