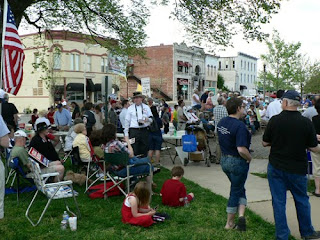 We went to our first Tea Party on April 15th and took the kids. It was rather interesting, lots of people with lots to say... I am sure they would have talked all day, had we given them the chance. It was hard to find in downtown Rogers because like most small towns, the downtown area is undergoing a revitalization and roads are closed, etc, etc. There weren't any sign posted directing anyone to the Tea Party, which I believe is a mistake on their part. More people would show up if they actually advertised it. Anyway, we met some of the candidates running for election and I look forward to seeing which ones win the primary. We won't be able to vote in the primary as we aren't registered voters yet... won't be until after we close on the house. 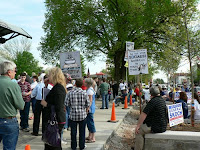 My favorite part of the Tea Party were the signs... there were a few that people actually spent a lot of time and imagination creating. The news coverage was lacking although there was a news van there. I think they were only their in case people got out of hand. I didn't see or hear a single racist comment, nor any negativity. The speakers didn't try to sway your vote and the candidates kept it clean. I think more people should show up to these Tea Parties in order to get more informed. So many people don't pay attention to politics and they should. Maybe our country wouldn't be such a mess if people actually paid attention. 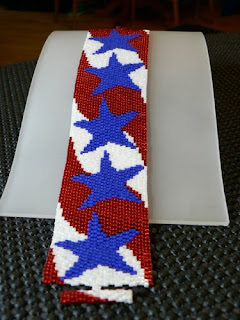 I wore my 3PD "Patriot 7" Cuff to the Tea Party. Its a great way to show my love for this great country. I was also fortunate enough to be invited to submit one of my Patriot cuffs to TAPS. TAPS is a great organization that raises money and support for the family members of military personnel. Normally the dependents get forgotten, when in fact, they are in fact the power behind the throne. TAPS is there to help fill in the gaps. I am an Air Force brat, whom, thankfully never needed TAPS. I am just glad that TAPS is there for those that do need them.
- April 26, 2010 3 comments:

One Of A Kind Beaded Cuffs/Bracelets

A selection of beaded cuffs from Artfire sellers that I like 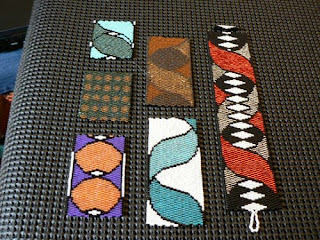 In case you don't have Facebook, here are a couple of pictures of my current cuffs for April 2010. The designs were thought up last month and have been waiting in the que to be beaded... I need to get a bunch done and the patterns listed because of the impending move. Then I will be slowed down with painting and unpacking and decorating. So I figured I should just jump in and start them... the ones I don't like or "feel" will be put on the back burner to simmer ad perhaps be changed. 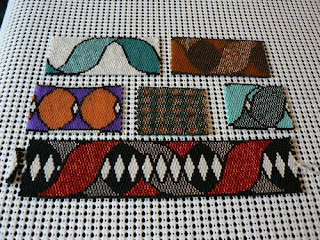 The one in the middle is called "Lake Trout,"I've been staring at a painted, wooden lake trout here in the cottage every day.... its right next to the bathroom sink. Another one is "Memory," its the white and 2-shades-of-teal -one, in the top row... a ribbon that reminds me of a person's memory... still thinking of names for the others... suggestions are appreciated!
- April 08, 2010 3 comments:

Another Cuff From November/December 2009 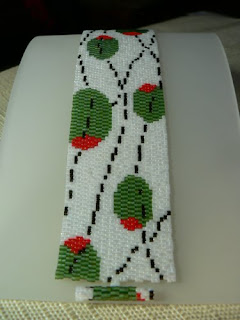 Here is another cuff I designed while watching professional movers pack up my stuff in November of last year. I call it "Olive Juice" and it grew from my feelings at that time in November because after a tough 6 months of being separated due to job reasons, my husband was home and we were packing up our stuff for our move to Arkansas. It was a celebratory mood, hence the olives from a martini. I don't drink martinis, I think they are nasty tasting, but perhaps I just haven't had the right one. And its called "Olive Juice" because the way your lips move, looks like you are saying "I love you" and its a funny joke from our college days. Anyway, the cuff is done in 2-drop Peyote. You can purchase the pattern from my Artfire shop http;//www.3peepsdesigns.artfire.com 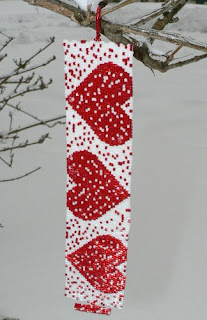 Another cuff created earlier this year is my "3 Heart Fusion" cuff. Of course this was for Valentines Day. I wanted some bright red hearts and I succeeded after trial and error. This is also 2-drop Peyote and I am really enjoying this stitch. I am glad I finally took the time to learn it. The pattern is also available in my shop. You might prefer the actual cuff and you can get it as a made to order cuff. You tell me the size and I will stitch it up and mail it to you. Here is a "goth" version of my cuff. Its not as sugary sweet as the white and red one. 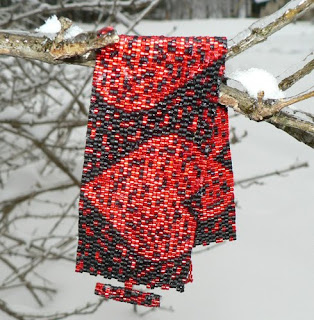 It really bugs me when when another artist borrows ideas and doesn't acknowledge it. This is one of the reasons that I sometimes question whether I should be putting my ideas and finished pieces out into the internet. But, I will try to stay positive and remind myself that she is a lot older and perhaps her ideas are slower in coming to her. I'm a lot younger and have plenty of years to get my things done. And I think I am doing pretty good considering this isn't my job and the only thing I do all day. I get a lot completed considering all that is going on in my life as well as home schooling my children and taking care of my husband, pets and the house. I document the entire process of my creations from the brainstorming - production - completion of my stuff just in case. And least this way I know I am not borrowing from other artist's ideas. Its one thing to be inspired by a piece and have yours turn out completely different. Its another to use the same exact subject, just larger and/or same exact thing with just different colors. Especially by someone so obsessed with copyrights. Irked.
- April 03, 2010 No comments: