I've decided to update the layout of my blog since its been so long since I last wrote. There have been many changes in our lives and things are finally settling down. Thanks so much for indulging me with my post about Mojo. I was so angry and upset but I've finally settled to just being sad and happy when I think of him - mixed bag that I hope eventually fades to just being happy when I think of him. So, we are finally getting settled in the new house and have added to our family. I didn't think we would adopt a couple of kittens so quickly (or what feels like quickly to me) but the kids were having trouble moving on. So about a month and a half ago we went looking to add another kitty to our family. I figured if we didn't start crying at the site of the kittens, then it would be ok for us to adopt one at that time. We didn't cry, in fact we did a lot of giggling and smiling. Well, we ended up adding two! And we didn't want another black kitty, but we ended up with two! One has long hair and we named him Einstein and the other has short hair and her name is Dixie. They are quite the pair and our older cat, Buffy, loves them!!!! The dogs love them too. I don't think the animals had any difficulty in accepting them. I was a bit slow, as was my husband but then all of a sudden it was just "Oh my gosh, they are awesome!" They both have bits and pieces of Mojo's personality without being overbearing... if that makes sense? Anyway, we adopted them through a local rescue called Forever Friends Humane Society. 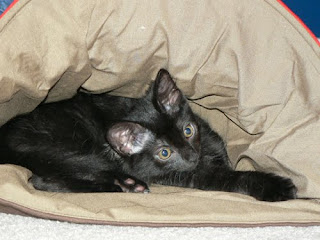 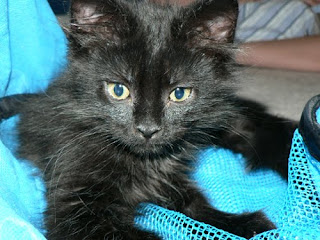 Other changes to life right now is that we've closed on the houses, we've painted several rooms and the furniture has finally arrived after several delays. So I am in the midst of organizing and unpacking. Its going well, although I don't think I have enough drawers in the kitchen LOL and I need a china cabinet. I pretty much let the kids choose the colors and design of their rooms with only a little guidance from myself. They seem to be pleased! Eventually I will paint their furniture. Danni and Apple's room is yellow with paw prints and Eddie and Charlie's room is blue with red stars. As you can see, Charlie loves his photo taken and managed to be in both photos, LOL. Anyway, we've had our belongings for a week and it is so nice to be sleeping and sitting on furniture again! 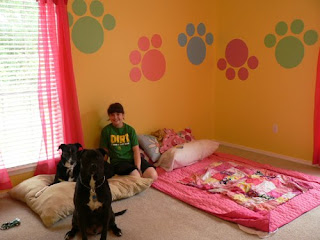 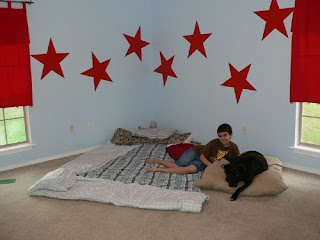 Like your new layout. It is much easier to read.

I enjoyed your family update too, especially the pics of your newest family member additions.

I love your cats. They are adorable.