Not So Wordless Wednesday

I'm trying to delay the inevitable... giving my son a haircut. He doesn't really want a haircut, but his hair is long and bushy and makes his head look too big for his body. We'll start the haircut with him complaining and groaning and generally being difficult and then we end it with him being happy and content. LOL Its frustrating. I wish he was like my husband so that I can just use the electric shaver. But nope, Eddie was blessed with my full head of hair except not as curly. And the electric shaver just makes his hair seem coarse and dry so I have to use the scissors. Anyway, so while delaying the haircut I am checking out status updates, surfing the web, and now blogging. I have the kids finishing up going through every last stitch of clothing (most of it was done yesterday, but I forgot pj's for him and swimsuits for both) and shoes. Big foot has officially moved in and Eddie only gets to keep two pair of shoes. Luckily we home school and I won't have to join the millions of parents out there school shopping, most importantly, shoe shopping. I hate shoe shopping with the kids. Without all of the stores we are used to from living in a big city, I feel like not only do we have fewer to choose from, but in the end we pay more. So, small town living is more expensive in my eyes. You don't have choice and if you want choices, you either have to travel to larger towns or order online. Ugh
Anyway, here are some of the things I've worked on over the last month. I've posted them on Facebook but have not posted them online. In fact, I've been not so good about updating the blog or continuing showing my stuff and describing the process of how I designed and created them. 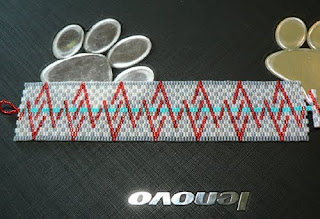 This cuff I named "3PD Zip Dash" and I created this last fall and only recently got around to stitching it up. I really like it and will eventually stitch it up in other colors. It took a little while to stitch because I kept changing my mind about colors and would have to take apart what I'd done and start over. I also had 3 versions going with differing widths and this is the one I settled on. Eventually I will list the pattern in my Artfire shop. 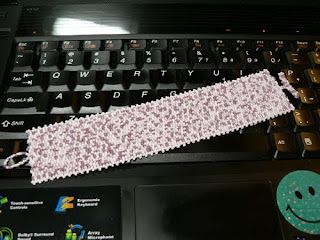 This is called "3PD Static In Blush". Its a cuff in which I picked four Delica colors and just stitched them up randomly like I did with another cuff last year called "3PD Black Static". I've seen some other cuffs like this since I did my first "Static" cuff and people call it bead soup. I guess its because they make a soup of beads and whatever ends up on the needle is what gets stitched. I liken it to the static on tv. Come to think of it, nowadays we don't see much static on tv with cable boxes. Just think of the movie Poltergeist from the 80's and the little girl talking to the static on the tv. Anyway, I embellished this one unlike the black one with some edging and I really like it. I created this one because I needed something other than black that was nice and understated for occasions that call for dressing up. 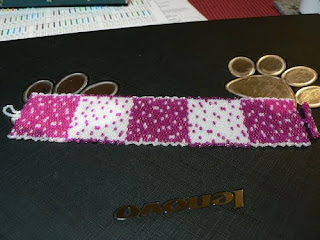 This one I called "3PD Cleo" and it really came about as a wanting something pink but wanting it to be sort of random too. I don't think I will be creating a pattern for it. I also put an edging on it since I liked the way the "Static In Blush" Cuff turned out. I will be making another one a little bit narrower for myself. This one is going to my almost sister-in-law. 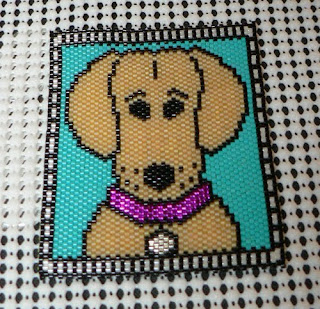 This is a new addition to my dog pack and its supposed to be a Golden Retriever. That is a tough breed to try and fit into the dimensions of my dog pack.... especially the hair. This one reminds me more of the Golden Retriever puppy. This breed was a request and I also need to come up with a Border Collie, Dachshund, German Shepherd and want to create a Boston Terrier and Pug. Anyway, I'd really like your feedback on this.

So other than these, not much has been happening in my world with beads lately. I have been consumed with unpacking and settling in. The kids rooms are nearly complete and the kitchen is pretty much done. I have starting hanging things, but it is tough in the rooms I've already painted because I don't want to have to patch any holes and repaint. I have to make sure I am absolutely sure about placement. In the unpainted rooms, I don't mind if I have to move the stuff and put more holes in.
- August 04, 2010

I didn't realize you home schooled your children. That's exactly what I wanted to do had we had any. Really cool and heroic, Mona!!!

Now instead, I am a stay-at-home dog mom to Lucy. When I sell my pet art, I tell people they are putting Lucy through school.

While you say you haven't created much art, I think you have...just in a different way than your use to...from moving, to painting rooms, to unpacking, to furniture placement. Besides, we artists need some down time to get our creative juices flowing again.

SQUEEZE--(big hug for getting your family situated so quickly)

Thanks Susan! I keep reading blogs that have the title Wordless Wednesday and after reading a few blogs today I saw your Wordless Wednesday post and was inspired to make a blog entry. Plus I was procrastinating, LOL. And titles are sometimes difficult to come up with.