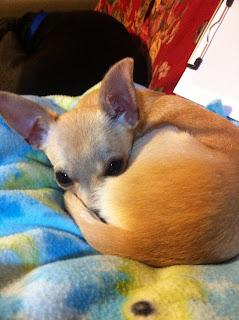 Hi! Life sure has been busy in the Ahleman household... we've got a new foster after having a little over a week off from getting Hootie adopted. This time - and for the very first time, I might ad - we are taking care of a little chihuahua. She is adorable, about 6 months old, 4.9 lbs and her name is Twinkie. She's been in the shelter pretty much since birth, she and her littermates ended up with Parvo and she is the only one who survived. She's gone between the shelter to the shelter manager's house and now our house. She was a bit scared on the drive and a bit timid the first couple of days but she's getting confident and we are seeing more and more of her wonderful personality. I have to admit, I was both scared and excited to foster her. Excited because she is so cute and who wouldn't want a little dog that could fit into a purse? Scared because we have 2 big dogs (almost 80lbs) and they get excited - especially Apple, she loves little dogs but doesn't know how to play calmly with them. But Twinkie is doing well and our 2 dogs are doing very well with taking it easy with her. 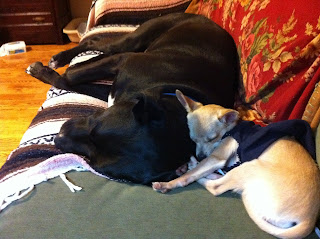 Charlie is happy to resume his nanny duties with Twinkie and I think in a few more days he will have her playing chase with him - they've already started a little bit of tug of war (he lets her win and just stands in one place) and she's having fun stealing his toys. She plays a lot more than I had expected and she doesn't care if its a big toy or a little toy... she likes them all. Charlie doesn't mind sleeping with her and even lets her sleep on top of him on his couch. At night, Twinkie sleeps in her crate (Yay! She was already crate trained by the manager at the shelter) and doesn't cry. That's a big plus because I would be scared of her sleeping on the bed with anyone but my daughter. Why my daughter? Because once she falls asleep, she doesn't move! She isn't a crazy tosser and turner and she doesn't sleep so deeply like the guys that she isn't easily woken up if something is going on. 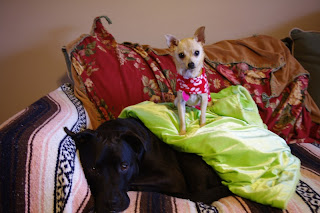 She's still barking at the cats, but they are a bit sneaky and unpredictable, but it's nice to see that the cats are not nervous around her. She is also now feeling confident with exploring the house and that has helped with her barking - at first she would bark at noises and her reflection in the window. Now she only barks at sirens on television and the cats. She does talk a bit... it's something inbetween a growl and rolling her tongue - it's very cute! 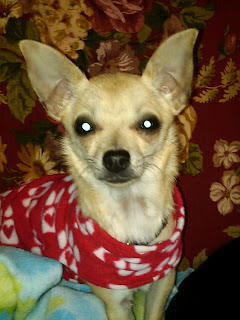 So, she's 6 months old, she's teething and will be getting her adult teeth in, she's recently spayed and up to date on shots. Again, the shelter we are helping out is the Madison County Pet Shelter and the adoption fee is $65. We are looking for someone with another dog who's calm and well-balanced to continue Twinkie's development into a well-rounded dog. She is both paper trained and will potty outside (we are working on getting her totally outside potty trained, but so far she doesn't like going outside at night - can't say I blame her as on some nights, the coyotes are very loud.) We've got her on a schedule for feedings and this helps out with her potty training. She has the potential to become possessive but we've been good about rotating people with her here in the house and we've taken her for rides to get used to the car and to get used to being out with other people.

Anyway, she's a ton of fun and a lot of people have already commented that she looks like she has found her forever home already. I don't know about that, LOL, but I am definitely going to take my time finding her a forever home. I'd love it if a family member were to adopt her rather than a stranger, but who knows. 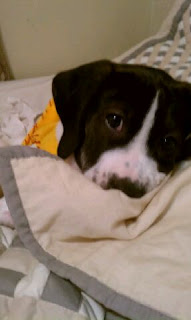 Hootie update! I've heard from Hootie's family and he is doing great!!! That is so nice to hear! Hootie's new name is Achilles and he still fits the sweater Danni made for him :-)
- February 09, 2012