Beading Work Amongst The Changes Part 1 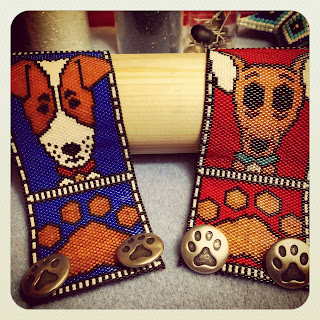 A Jack Russell Terrier and a Chihuahua have joined my line of dog cuffs. I decided that I like the single large paw print on either side of them rather than the four smaller paw prints. One of these has been donated to a new shelter doing some fund raising in Prairie Grove, AR and the other is in my stash. I will create the pattern and offer it in my shop very soon! 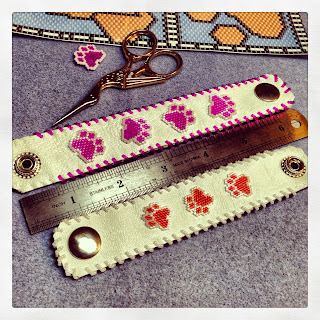 A pair of paw print cuffs for little kids... one was given to the daughter of a friend because she is involved in pet rescue just like her mother and I wanted to let them know that I really appreciate their efforts. The other may be going to my new little niece :-). Anyway, the paw prints are beaded one at a time by me from a pattern I created when I first started beading years ago. Then one at a time they are attached to the leather, the leather gets the snaps put on, the leather gets lined with ultra suede, and then I edge the two pieces together with 15/0 seed beads. I do not use any glue so that they are nice and flexible and I do not need to worry about the glue ever dis-coloring the Delica seed beads or coming off, etc. 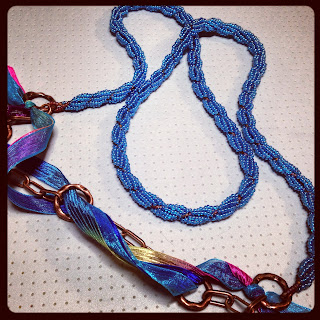 This was a repeat for my sister-in-law. Her husband actually purchased the original and she requested a duplicate for a gift for a woman who plays a very important roll in her life... perhaps being the mother she should have had. Anyway, its spiral stitch with seed beads and embellished with copper chain and silk ribbon. 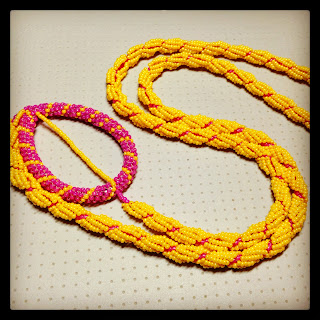 This is a spiral stitch necklace that I created using hot pink seed beads and bright yellow seed beads... perhaps the happiest color combination that comes to my mind. This stitch is super relaxing and easy to do for me and is one of my go-to projects when I have a lot on my mind... kind of like the peyote stitched paw prints that I like to make. This one will be showing up in my shop as soon as I can set myself up to take some good photos... the new house doesn't let in a lot of light and the yard is slowly being taken back from the insects...

The house was empty for so long that the insects took over.... the spiders are now outside where they belong and we just have to deal with the horse flies and the bees (the ground dwelling variety). My son and husband suffered from some stings... okay, my son was stung once but my husband was stung multiple times on more than one occasion. Slowly, but surely the bug stuff that was applied to the yard and the insect killing powder that was applied directly to the holes have started to work.... now we just need to wait for the horse flies to die. And I thought the biggest nuisance would be the mosquitoes and occasional ticks... ha, what do I know? Even though I like the peace and space of the country life, I am still a city girl when it comes to the bugs.
- September 24, 2013 No comments:

Again, I have to apologize for letting time get away from me and the blog... there have been a lot of changes in our lives and some were good, and some not so good. 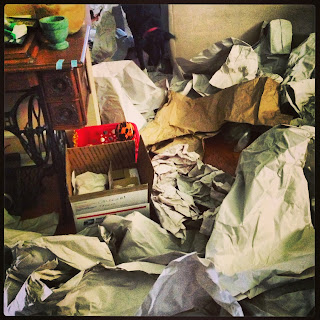 We finally sold the house in Arkansas and bought a place outside of Memphis. I didn't really like the house (I still don't, but it is growing on me), but the kids and husband liked it so we put an offer in and closed on it. We had a super quick closing on the house in Arkansas, the whole process from the offer to close was only 2 weeks! The closing here was a traditional 4 weeks, LOL... and then we had a week and a half to move our belongings from our temporary rental to the house, paint the kids' rooms (I always paint their rooms first so that they can be settled first), and meet the movers with the rest of our belongings. Whew! It was a crazy whirlwind and we didn't have any help from family or friends. Our little family has gotten to be pretty self-sufficient with our moves. Some of our family was supportive from a distance and some of our family was the usual PITA.... after almost 16 years of marriage, I guess I have to accept that that will never change and together we've learned to tune out the aggravating people in our lives. 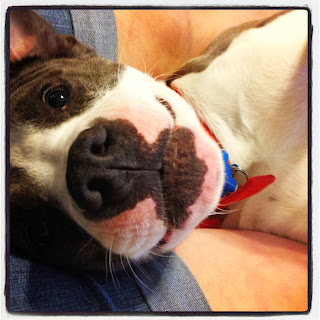 We suffered a huge loss to our family unit. Sage, the beautiful pup we rescued from a couple of college students up in Northwest Arkansas, continued her downward spiral... she just couldn't handle the changes, her fear anxiety was so bad that the various drugs we tried (under supervision with her vet and a behaviorist) would only work for about 4 to 6 weeks and then stop. She also suffered from a couple of seizures from one of the drugs. Her behavior was so odd and unpredictable... at first she only acted out towards our other two dogs, but she was getting aggressive towards strangers. We made the shitty - to be quite blunt - decision to euthanize her after she went a bit crazy with the cable guy. Our vet agreed, she admitted that we had tried everything she could think of, had seen how we rearranged our lives, and admitted that sometimes dogs can't be helped. The rational me knows this, but it is a hard pill to swallow. It's been a couple of months, but I am still dealing with the guilt and pain and disappointment. Its gotten better, I can usually talk about her with a smile and without tears, and other times, the quiet times that I am alone, it isn't so easy. She had such a big personality and was such a huge part of our lives. We rearranged our lives so completely dealing with her little issues... Anyway, life has been tough and I haven't been inspired to blog or update my shops or anything else that isn't a priority like homeschooling and getting the kids settled in. Gosh, when she was good, she was just awesome.... our little acrobatic clown. And when she was bad, well, she was bad at no fault of her own. Truth be told, it's been a little bit tough for Charlie as well. He won't play catch outside. He will not use her ball except to pick it up and put it somewhere else. We took a little vacation home and he was able to see his mother and his sisters and that helped a little bit, but now we are back home and again, he won't use the blue ball because that was always Sage's ball. These balls are whistle balls and sold in packs of two; one orange and one blue.... I may have to donate the blue ones. Our other dog is always happy so I don't know if she is sad or not.... she still plays a lot more because of Sage and I am glad for that. The cats don't seem to care and us humans are dealing in our own ways. 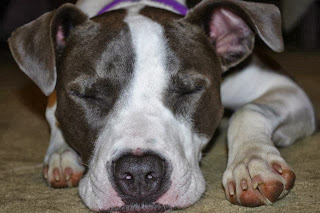 Anyway, amongst the unpacking and rearranging, I have been beading. Nothing too crazy or exciting. I continue to donate to rescue groups and do basic bead weaving. I have not decided about a free pattern.... well, I think I have, but now I need to figure out how to get the pattern to those who want it. I will probably just go with sending it directly to those that email me or leave a comment requesting the pattern. Anyway, I will blog more about that soon! 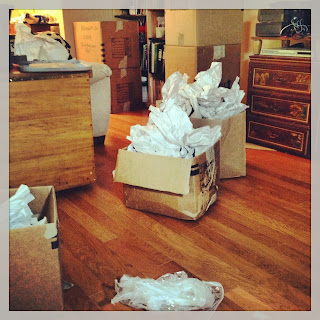 Amongst all of the drama of moving and unpacking and painting and the loss of Sage, we also had the pleasure of welcoming my first niece into the world! She is a beautiful little princess and although we have yet to go out to New York to meet her in person, I feel as if I know her already because my brother and sister-in-law send us photos every day. She is gorgeous and she is one of the happiest babies I have ever seen. Along with some store bought baby gifts, I made some burp cloths for her parents.... I remember the store bought ones were never big enough and the cloth diapers that I decorated many years ago to act as burp cloths, were also too small.  I had a good time making them, but they were also frustrating because I am not always on good terms with my sewing machine LOL. I tried to make sure that they weren't too girly so that my brother wouldn't mind being seen in public with them. :-) 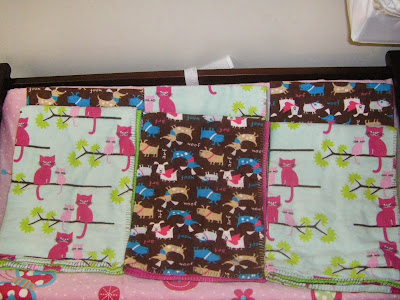