Well, once again I've slacked on my blog....

Things are still just crazy busy. Our church life has grown by leaps and bounds, we found a Catholic Church here in Memphis that we really like. We are doing what we need to do to get Jay back in good standing as a Catholic that's been through confirmation and everything. This means we are taking classes on the weekends in order to get remarried in the church... so that the church recognizes our marriage. After that, the kids and I will take catechism classes so that they can be baptized and then the three of us will be confirmed... I think that is what you call it. We are going to a Traditional Latin Mass and doing things the "old" way which means Jay is learning everything all over again... the right way. I'm enjoying it. I find that I actually sleep pretty good at night.... I guess I needed to go back to the faith and teach my kids the faith. Some days I'm ashamed that it has taken me so long, but I honestly had no idea that there was a Traditional Latin Mass, let alone a church that follows the Pre-Vatican II stuff. I feel like we are home. 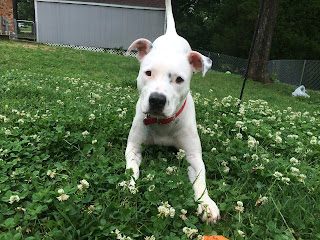 And we started fostering Maggie Moo again. Her adopter ended up getting ill and as a single woman, could not take care of Maggie Moo. She remembered everything about being here and was happy and excited. She and Ruby were thick as thieves. Ruby was adopted about a month ago and the young lady is in love with her and she's living the life she always should have had! Happy life to Ruby - WOOF! Maggie Moo has had an adjustment getting used to life without Ruby, but we think she has finally found her perfect family which includes kids and two parents and a cat and lots and lots of extended family.  Prayers that this adoption works out and that she is in her new forever home by the end of the month. 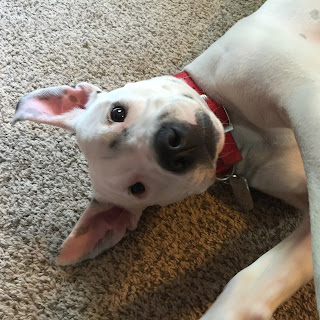 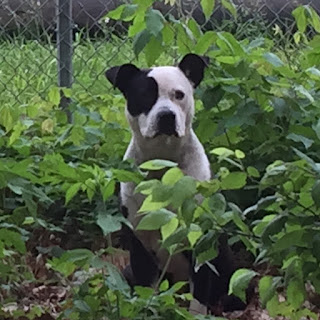 In May, we found a dog and fed him for a few days and earned his trust and brought him hope on a hope and a prayer that we'd be able to get the rescue we foster for to take him in. A few good people have donated towards his vetting (shots, neutering, and Heartworms treatment because he was, of course, positive) and SOAR Doggy Rescue took him in. He's a big goof ball and has charmed quite a few people... including us. I can tell he's going to be hard to give up when the perfect family finds him. We are calling him Z-Bo... that is the nickname of one of the Memphis Grizzlies that is a Michigan State University Alumnus... Zach Randolf aka Z-Bo. I love Z-Bo a lot. The HW treatment is tough, he's on crate rest most of the day because he's too hyper otherwise. We are almost done with the first treatment, next week he goes in for the next  2 injections and then it's another 4 weeks or so of crate rest. He's tough and he's keeping his sense of humor through all of it. I love him.... did I already say that? So far he loves all other dogs... especially Charlie and I think he has a crush on Apple, which is funny because she's old and grumpy and always growls at him. She only has an interest in him when he has food. 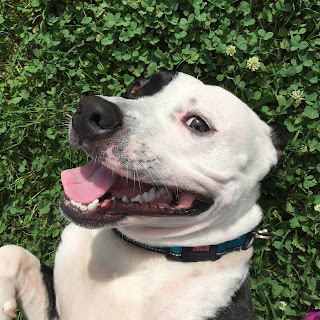 A day or two before we brought him home, we found another little critter... a kitten stuck in a fence. The vet says he was about 6 weeks... barely eating regular food (and not without having to get the syringe and squirting it in his mouth to get him to eat.) He was in good shape, no fleas, but was developing a respiratory infection... probably due to being hung up on the fence in an all night storm. Of course, there is a reason why we don't foster kittens.... it's because its too hard to give them up. So, Little Loki will be living with us forever. Our cats all love him, so it was kind of an easy decision to make. 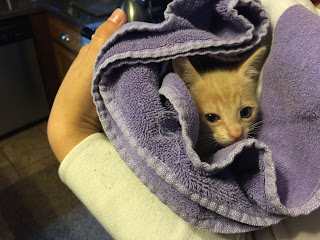 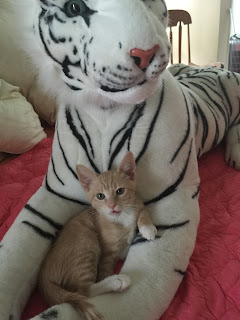 So, since Z-Bo has been undergoing treatment, I've been slacking in the beading and creative areas. I guess I feel bad that he can't have much fun except for brain games in his crate.

Next time I will update you on the projects.

Thanks for posting such a nice blog. It’s really a nice blog and highly informative. Thanks

Well thank YOU for stopping by and checking it out!